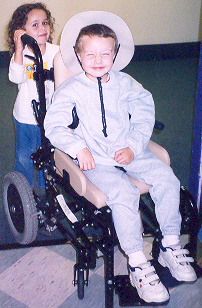 Tuesday 5/6/03
6:00 am - Cillia woke Les up for an early breakfast because he would not be able to eat after 7am. He was scheduled to receive anesthesia during his bone scan later in the day and needed to fast 6 hours prior to the scan. Cillia went to the cafeteria and they actually had biscuits! Not as good as Grandpa Barry’s, but biscuits just the same. Breakfast was finished at 6:59am.

8:00 am - A technician rolled a portable echocardiogram machine into Les’ room and took ultrasound pictures of Les’ heart. It went pretty quick and Les didn’t miss much of his TV program. The tests are all part of Les’ base line evaluation. The oncologists want to know where he is when the therapy begins to see what, if any, changes happen during therapy.

9:00 am - Daddy comes to the room after staying the night at Grandma’s.

10:00 am – A nurse took Les (mommy and daddy too) up to Radiology to have a special infusion to prepare Les’ body for the bone scan.

10:30 am – The activity center is open for playtime. Les has become a mean air hockey player. It’s great for him to get some eye/hand coordination in. He uses both his right and left hands. While Jason and Les were playing Cillia took the opportunity to take some things to Grandma’s that would be staying in San Diego, pick up the laundry that was left at Grandma’s and also take a much-needed shower.

12:15 pm – Cillia returns to Les’ room to find Les taking a nap and Pastor Jeff Pierce visiting with Jason. Jeff’s visit was encouraging and it was also timely as Jason had Jeff transport his guitar back to Murrieta.

12:45 pm – The nuclear medical technician wanted Les to show up early for the bone scan in order to try the scan without anesthesia. Les did great so the anesthesiologist was turned away. Yeah! That meant when Les was finished, he could get right up and go about his business of eating lunch!

1:30 pm – Jason helped Les change into some “real clothes” and then off to McDonalds for some chicken nuggets.

2:30 pm – Friends showed up to help pack and haul things home to Murrieta. Many gifts, belongings, and paraphernalia have accumulated over the past 12 days.

3:00 pm – The final procedure that Les had to endure was the removal of his IV. Not a happy story, but if you asked him, he would tell you that he was “really brave”. Ha Ha.

4:?? – Cillia and Jason finally go over the discharge forms with the nurse.

5:00 pm – Rush Hour traffic is now in full swing so a detour to Grandma's for dinner & dessert.