Today was the 3 month follow-up MRI and doctor appointment after Les's brain surgery to remove a cavernoma.  All looks good, and he needs annual follow-ups until he is 30.  Wow!  He just turned 16 two weeks ago.

As you can see, brain cancer never really goes away - the actual cancer can go away, but the lingering late effects keep revisiting in various forms.  I guess there are two types of cavernomas.  The "spontaneous" kind get removed, followed up for a year or two and that's it.  Les does not have that kind.  Les has "secondary" cavernomas.  These are caused by radiation to the brain, which he had 7 weeks of, when he was four years old.  These "secondary cavernomas" are unpredictable.  Sometimes they show up, sometimes they don't. Sometimes they wait 10 or more years to show up, as in Les's case.  Sometimes they show up, and as our doctor says, "they play nice", meaning they just sit there and nothing happens.  Sometimes they get angry and ooze and cause seizures, which is what happened with one of Les's cavernomas last January.  Yes, Les has more cavernomas, but so far they are "playing nice".

The good news is that they are NOT TUMORS.  They are benign little nuisances which will keep us on our toes, but not in the Hem/Onc ward.  Praise God for that!

Posted by cjfountain at 8:17 PM No comments:

Les woke up last Thursday (1/15) with a "new brain".  He recognizes that something is different. It seems his thoughts are bouncing around in the new space left from the removal of the cavernoma.

He's got so many more ideas of things he wants to do. Teen pop star, lego designer, sound engineer/radio producer, go on cruises, etc.

None of his ideas correspond to accomplishing school work though.  So, the homeschool schedule is hard to maintain because he is more easily distracted; so much so that the meds that help him focus and concentrate don't seem to work anymore.  Needless to say, I'm having to constantly adjust my parenting techniques and he's keeping me on my toes trying to guide this "new brain".

The upside of all this is that he is extremely upbeat, positive, and confident. Maybe watching The LEGO Movie and playing the LEGO Movie video game over and over again before and after surgery influenced this.  Because you know, "Everything is AWESOME!"

Posted by cjfountain at 9:38 AM No comments:

We went to Les's post-op appointment today and everything is progressing well. He can't do PE type activities for a month, which doesn't dissapoint him at all!

School starts back tomorrow, so we will see how his brain works.

Thanks again for the prayers.  We still need them during this recovery/transition back to school process.

Posted by cjfountain at 9:04 PM No comments:

The Game is Here

Friday was movie watching day with a nap thrown in for good measure.  Our friends brought dinner and then we played some non-video games.

Today (Sat) Les received his long awaited video game- the LEGO Movie game. Mom and Les played all morning, then a break for lunch, and then friends came over and the kids played some more. 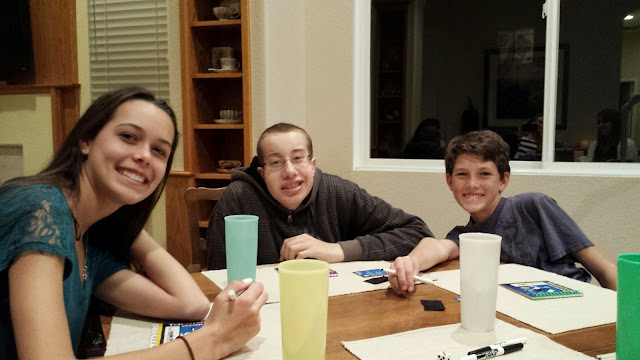 Posted by cjfountain at 9:57 PM No comments: